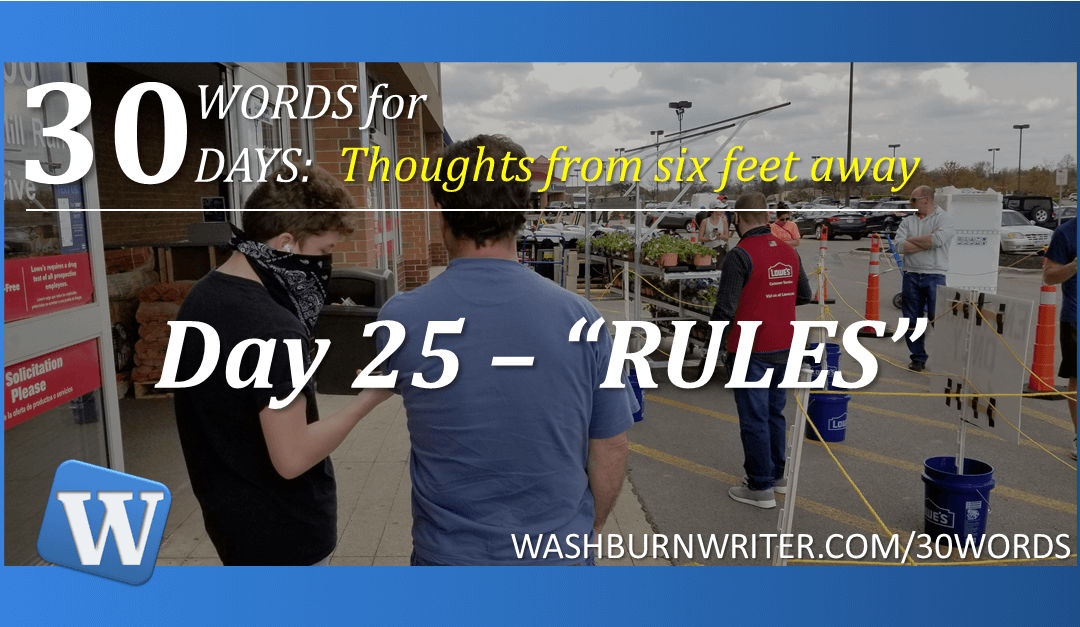 The rules are changing and our future depends on those willing to follow them.

I went to Lowe’s today and it was my first time waiting outside in a socially-distanced line to enter.

There were about thirty of us, some masked like myself, others not.

But all were keeping a safe distance and playing by the rules.

And no one was complaining.

It gave me hope that we’re going to be able to start moving forward in other areas, reopening businesses in creative ways while still doing all we can to defeat the virus.

It’s clear by now that we’re not going to magically wake up a month from now and have things the way they were back in February.

But my experience today showed me that it’s possible to keep everyone safe while still keeping the economy running, even if at a diminished level.

Rule breakers have had a mixed history.

One type of rule breaker is the person who has their own best interest in mind and selfishly breaks rules because they just want to.

Take an elementary school student, for example, who’s classmates lose out on recess because of something he does to draw the ire of his teacher.

But there are other rule breakers as well.

Those who aren’t satisfied with the answers they’re given or restrictions that have been long held.

They’re the ones who are willing to step on toes, ask hard questions, and not settle until they’ve broken through and won a victory for others.

The Rosa Park’s of the world, who believe that there are rules that are unjust.

Or the leader who challenges the status quo of a company or an industry.

As we look to the weeks and months ahead, we’re going to need a mix of rule breakers and rule followers.

And often they will be one and the same.

We’ll need rule followers who are willing to wear the masks, socially distance, operate under the new rules laid out that will allow for businesses to begin to open back up in a new world but still offer the products or services that they have made a living providing.

Our health and safety and economic futures depend on this.

Rule breakers who are willing to ask tough questions, to interrogate the headlines and reports and tests and social media buzz.

Rule breakers who are willing to stand alone at times because they’re challenging what others might be commonly believing.

Rule breakers who see beyond, care about defeating the virus but also saving a society at the same time.

Rule breakers who are willing to say hard things, push boundaries and fight for those whose messages aren’t getting heard.

Are you willing to follow the rules when you need to and break them when you have to, all in the name of putting others first?