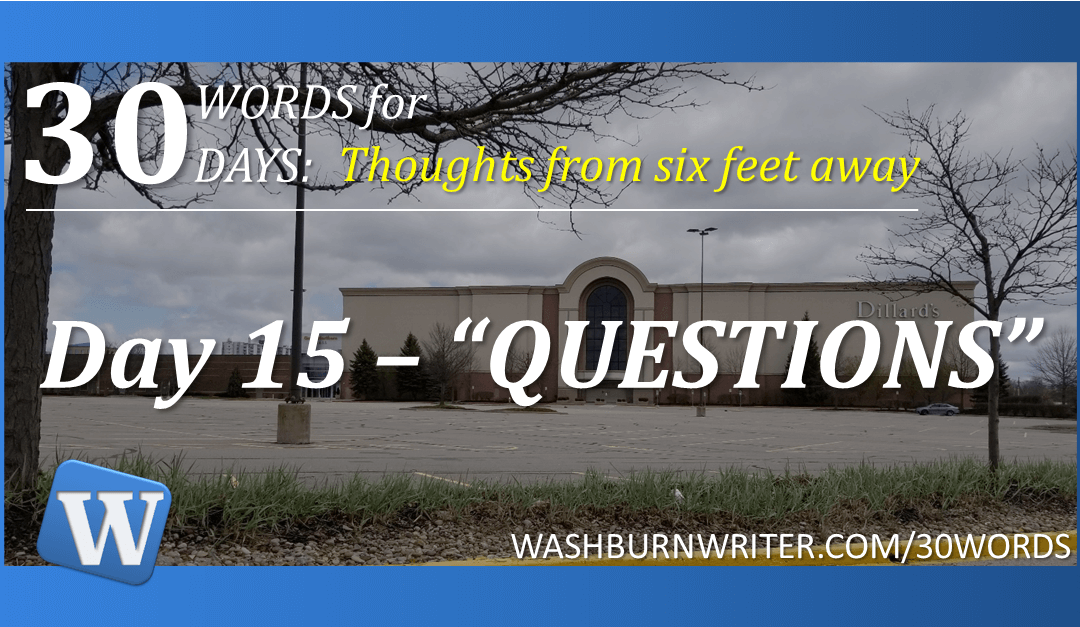 This probably won’t be a popular post (though I’m not quite sure how that would separate it from the others 😉).

So, I’ll just get right to it.

Questions are an interesting thing in our society.

When we’re little, we ask a lot of questions.

No matter which word wins the title of “first word” for us, the word “why” is usually not far behind.

The average toddler can probably out “why” anyone.

They’re able to rattle off so many whys in a given day that parents are just left stunned, speechless and exhausted.

It’s no wonder that the parental recourse is to squelch the questions with answers like “because” and the silent treatment (which doesn’t actually seem to work).

But one way or another, the ability to question is beaten out of us somewhere early in life and we resign to just accepting things.

Couple that with a culture that is increasingly closed to respectful back-and-forth and you it makes it even tougher to question… when those questions are frowned upon.

Questions For A Hypothetical Country In Quarantine

I’m sure you have plenty of questions as well. Here are some of mine… hypothetically…

Why did this all have to happen? Is there a conspiracy? Was it from a lab? Or just a random bat biting somebody and spreading?

Why is this time so different from other viruses and epidemics in the past?

What are the limitations of the state and federal government for dictating how we live, what closes and doesn’t, etc? I really had no idea it could happen like that with things just being forced to close in a snap.

What data and sources and models and research can you really trust as far as what the spread will actually look like?

If we were supposed to peak much higher and later and it looks like we actually have flattened the curve, what will the next steps look like? Can we begin to go back to things sooner?

I wonder what our country will look like a year from now? What will the after affects be from shuttered businesses and even from the stimulus bill that didn’t just come from nowhere?

Is it wrong to think that we need to try to get the economy and businesses back up and running sooner than later?

Is it wrong to think that you can ask that question and still care for the lives of those hit with the virus? I have two parents and a sister who would be vulnerable and I don’t want anything to happen to them, but I also want them to have a society six months from now that hasn’t been run into the ground.

Would anyone from February 2020 have ever believed where we would be in two short months?

When will CNN start just reporting on the news and not exclusively bashing everything Trump does? I’m not a big Trump supporter, but 90% of CNN alerts I see have his name in the title. Last I checked, there were things going on in our country and with the virus not involved with him.

Why did this have to happen to this years seniors (including my son Eli)?

Do schools have any chance of opening back up this year? What will happen to graduation? Will there be a tiny spring sports season or none at all?

When will professional sports return? What will they be like without fans? When will fans be able to return? How many?

I wonder how many small businesses won’t be able to make it out of this? How much talent and love and passion and vision and creativity will have been wiped out through this shutdown? Who will be able to pivot? Who won’t?

How many people thought that one day they’d be wearing a mask in public? At work? At the store?

When will they find a vaccine?

When will more testing be available?

When will more antibody testing be available? If you test positive and can prove it, does that allow you to get back into normal life or be immune?

One thing I hope we can all do better at is ask questions respectfully, offer what answers and ideas we have respectfully, and together move toward both keeping people safe and regaining our economic footing in this… hypothetical… country. 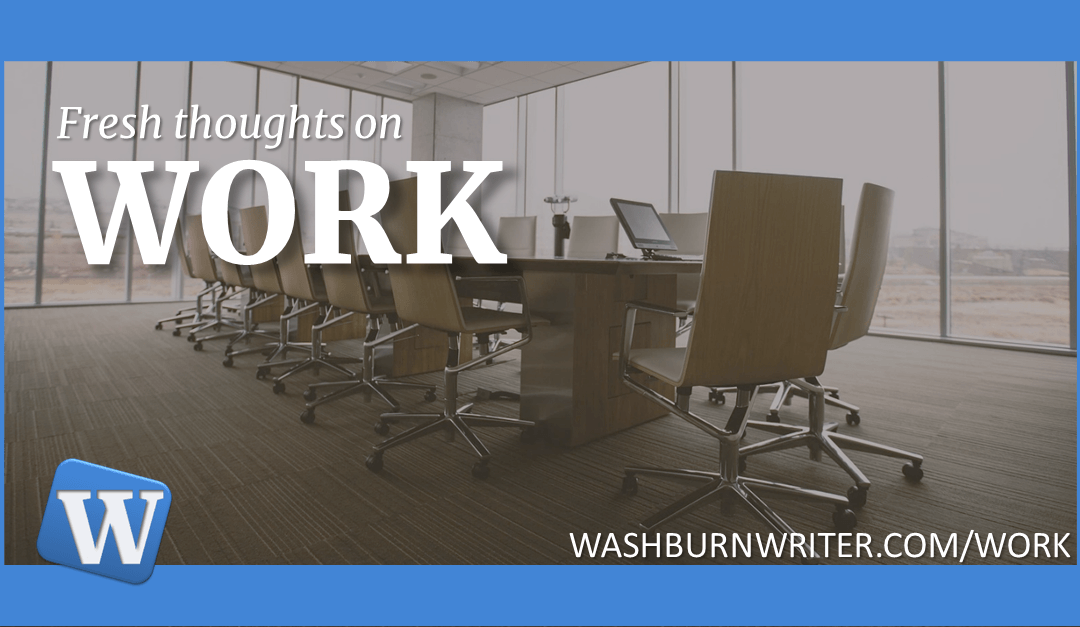 Right now, as you read this very sentence (or skim past it to the next headline), there is an business office that is struggling. Maybe it’s yours.

You’re struggling to find the right team member. You’re looking for someone with confidence, curiosity and determination who can come in and transform the way you do business.

Meanwhile, across the country (or maybe just around the corner), there is a young mom of a toddler that is also struggling.

She is struggling with the tiny human that has come in and turned her life upside down… both with his cuteness that melts her heart and with his insatiable appetite for destruction that melts her energy and hope.

It’s not hard to look at these two situations and see that there is a perfect solution for both parties staring us, defiantly and with a little jam smeared on his cheek, right in our face.

What if that toddler is exactly the kind of worker that your office needs?

And what if the toddler being out of the house is exactly what that young mom needs right now?

1. Toddlers ask a lot of questions

The very thing that drives every parent of a young one crazy is the exact same skill set that is missing in so many workplaces.

They’re willing to ask “Why?”

It’s the power of asking questions that is so often missing in our current workforce.

Good questions are preferred, but in this day and age, any questions will be accepted.

We live in a world where fewer and fewer people know how to dig deeper, to do a little investigative work or to solve a problem or come up with something new.

Often, when encountering a roadblock or just a tedious task, typical employees just rely on their own personal Google (read “supervisor”) to solve everything for them.

Rather than ask “why didn’t that work?” or “why do we do things this way?” or “what would happen if…?”, they just plod through and try to get things done, inefficiently or not at all.

But that toddler… oh man… what that little boy could do for that office.

From day, one he’d stagger in there, look around and start firing off “Whys” like bullets from his pint-sized six-shooter.

“Billy, you need to fill out a PRN before you can do the TFSP, but you need to use that computer there…”  “Why?”

“Billy, you can’t just eat the sugar right out of the packets…”  “Why?”

A toddler would be that disruptive force that would bring about real change by questioning the status quo and allowing people to re-imagine what their work could be like.

He would be awesome.

2. Toddlers are willing to say NO

If asking “Why” is a toddler’s peanut butter, then loudly proclaiming “No” is their jelly.

Like a 25 pound prize fighter, “No” is like their upper cut to their question-asking jabs. “Why, why, why….NO!”

One skill that can be hard to master for most people in the workplace is this very ability to say “no”.

We all want to be helpful, to go the extra mile, to do our part.

But along the way we add on extra tasks to an already full plate, thinking that we can do it all.

Or we agree to a deadline that we know we can’t meet to try to make someone happy or to look good in their eyes.

But too often all of this leads to the opposite. Deadlines get missed, workers get stressed, the workload falls off the overloaded plate and onto the floor.

And that’s where the toddler comes in.

First, they will eat that workload straight off the dirty floor because that’s what they do.

But then, they will begin to do one of the things that they do best. Say “No”.

They’ve been practicing this skill since they could first speak the word….

Drop Billy into that office and he’d have no problem working efficiently and staying focused and on-time.

“Billy, I know you’re trying to finish the Miller project, but can you give me a hand with this?…”    “No!”

“Billy, we just had to order another case of glue because you ate the last one. We need you to stop…”   “No!”

Billy would be the “Noer” that you’ve needed in your organization, to

Billy would rock that.

Often our greatest breakthroughs come right after we’re about to give up… but don’t.

Unfortunately, many workplaces like yours can struggle to build that into the culture. To not give up when things get tough.

That’s when the best ideas often come — when we’ve exhausted the “logical” solutions or feel like there just isn’t a solution at all.

That’s when innovation dips into our decisions, our conversations, our meetings and when change truly happens.

When that persistence is missing, things just stay the same, productivity slowly takes a nose dive and companies aren’t as able to offer their best to their customers.

But where can you get someone with that kind of “not-back-down” attitude?

Enter our little friend the toddler.

Toddlers have a will like no other and will keep banging against that wall until it comes down or they get what they want.

They’ve never met a roadblock that they didn’t think they could get past.

Drop them into your office and sick them on your toughest project and they will push and strain and plug away until it gets done.

Barriers, rejection and resistance just seem to melt in the wake of the determined toddler.

They will get their way. And if you can get them on board with your company’s mission, they will wear down anything that opposes them.

Just ask anyone in your office who has ever had a toddler taking up residence in their house, or holding a standoff in the busiest part of the mall… or at bedtime.

Yep, toddlers have exactly the type of “don’t give up” attitude that is needed today to keep your team and initiatives moving in the right direction.

Okay, so, even though toddlers bring with them these three awesome strengths, there is still one big drawback:

I’m not exactly sure how to put this, but toddlers like destruction.

Imagine a tornado meeting an earthquake and having a baby. A literal baby.

Unleash that offspring into your office and within minutes every drawer will be ransacked, every door opened, office supplies everywhere, plugs unplugged coffee spilled, and more….

That new little teammate will jump from one crime scene to the next, giggling all the way.

Oh, your vendor brought in donuts? Oh, I think you meant sugar-coated, smashed up floor pucks.

New box of paper clips? Wonder how many can he stick into your USB ports at once.

New cartridge of ink toner? I won’t even describe what’s about to happen there.

You get the picture.

If you can survive the mass destruction and weather that storm, the upsides will far outweigh the mess. I think.

Well, there are still some barriers to all this. Child labor laws, ADA for toddlers in the workplace, purchasing all shatterproof equipment.

But, boy, once those are in place, just find your nearest frazzled toddler parent and you’ve got your next great employee ready to come in and make things happen.

Just make sure you get stocked up on the Cheerios first.